Audience with His Holiness

So yea, today, we had a short audience with H.H. the 14th Dalai Lama of Tibet, Tenzin Gyatso, reincarnation of Avalokiteshvara Buddha, spiritual and temporal leader of the exile state of Tibet. We went through the long security process at noon, and were led up the beautiful, monkey infested (best infestation ever), garden path to his residence, the most ridiculously humble palace I've ever seen. We were led through the palace to one of the small meeting rooms, whose walls were covered in beautiful mandalas, and contained a 3 foot tall, golden Buddha statue in an ornate glass case on the far wall. 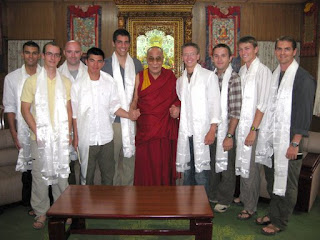 He greeted us in the traditional Tibetan way by placing a long white scarf over our necks, and then in the western way by shaking our hands and looking us in the eye. We then proceeded to sit down in a circle on the couches. His aides, Tenzin Takhla who set up our audience and one other, introduced us as a US Army officer and cadets from West Point. Major Sowers told him that we were volunteering in Dharamsala, and that we were very honored to have such an opportunity.

His Holiness began, rather uncomfortably--I think it may have been because we were military, by asking us what we had learned so far in our time in India. He is average height for a Tibetan, probably 5'8", and seems to be in very good shape and health for his age. He was unshakably cheerful, and laughed at everything (had us giggling like schoolgirls too). His English was good, but slow and unsteady. He often asked his aides for the translation of a word, which they provided (or confirmed his own translation) with ridiculous immediacy and exaggerated nods of their heads.

MAJ Sowers looked to Brian who quickly supplied an answer to the Dalai Lama's question, the rest of us were still to jittery to think straight. He talked about his visit changing his plans for his future career (he now wants to be a physicians assistant). H.H. paid undivided attention and then nodded and confirmed one of the words Brian had said with his aides. Sean jumped in and talked something about love and compassion, I really didn't catch it all since I was too busy thinking about my answer. H.H. answered Sean semi-jokingly by commenting on the peacefulness and easy going nature of Tibetans in contrast to the relative difficulty of Indians, and the emotionality and nationalism of the Chinese.

He then started to just talk to us (I guess he had formulated what he wanted to say by then). He said that, while Americans as a nation have made mistakes, such as Iraq, which he said was a disaster and a waste of many lives, he loves us because we are the world's champion of freedom and democracy, and that he respects our military because we are an Army of the people and the constitutional government, and not of the whims of a party, like the tyrannical PLA which he joked was now engaged mostly in suppressing the people. When he was talking about Iraq, he cited meeting friends in Jordan (I think he refers to everyone he meets as his friend, which I think is pretty cool) who said that there was rising hatred in the middle east for the US which resulted, interestingly, in rising support for China, because they also hate the US. He commented that that was terrible. He then also cited another friend who had recently visited Iraq and had told him that things are going very well there, and that people were increasingly liking the US, which is very positive. (MAJ Sowers told us today that the month of July saw 11 soldiers killed in Iraq, the lowest ever).

He talked for a while about George W Bush, who he called a good friend, he said that he was a very "straightforward" person, and that they were instantly friends. That was apparently not the case with Pres. Clinton, who he called standoffish on their first meeting, and then the next meeting and the next meeting they grew closer (he gestured this with his hands getting closer and closer). They are now apparently good friends, and he added as a sidenote "and Mrs. Clinton too." His Holiness said he liked George Bush very much, but he told him "some of your policies, not so much." On a very sad note, he recalled to us that he once wished Pres. Bush a very long life, so that he may eventually see the good results of his presidential actions. H.H. then gestured to his eye, "and a tear, in his eye." I didn't notice it at the time, but MAJ Sowers noticed the inherent sadness of that statement. After all, His Holiness himself will probably not live to see a free Tibet, let alone an end to the genocide of his culture.

The whole meeting lasted a little more than 20 minutes I think. It seemed like a lifetime, in the best way that could possibly be meant. We departed by taking a group picture and shaking hands. I will never in my lifetime meet another man as incredible as I have today.
Posted by Kris Webber at 9:45 AM