We departed for our 25 hours of travel Wednesday morning, and arrived Friday night. The flight to Tokyo from JFK was relaxing, almost enjoyable since we all managed to get upgraded to business class. I watched a couple of great movies and spent a while practicing some vipassana techniques I learned from Gil Fronsdal’s podcasts on the drive down to West Point. I had a near-epiphany moment on that drive, a couple things he said helped me gain a much deeper understanding of the whole practice of mindfulness meditation.

Flying into Tokyo was an experience. We had to fill out a 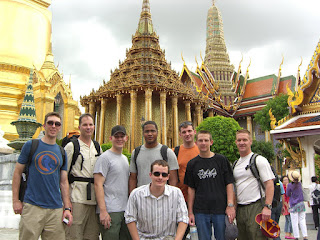 quarantine form, confirming that we didn’t have [animal type here] Flu. The number of people wearing face-masks was a little unnerving, but Doctor Weg seemed to think we probably weren’t going to die. A bunch of inspectors had to come through the plane before we could get off though.

The Engrish to be found over here is hysterical. That quarantine form had a footnote that claimed: “this for protection to you and a family.” And prominently displayed in the terminal of the Tokyo airport was a tech firm ad touting their research of “electronics insurating matierials.” The Engrish jokes went on for the rest of the day.

We got into Bangkok near midnight and went out to find a metered taxi, which involved dodging through a crowd of non-metered taxi and tuk-tuk (Thai rickshaw) drivers who also wanted our business. I immediately noticed the difference in attitudes from my previous experience in India. The Indian cab drivers were prone to grabbing and raised voices to get your attention while their Thai counterparts spoke quietly, bowed, and held smiles on their faces. It’s more pleasant, but also makes it a little harder to have to say mai chai (no) over and over again. 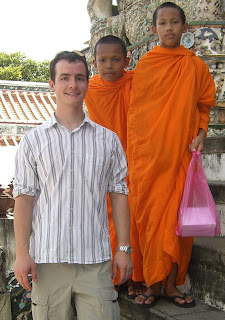 me well). I attempted sa wat dii khrap (hello), sa bai dii reu (how are you), khun cheu a-rai (what’s your name), phom cheu Kris (my name is), maa jaak nai (where are you from), and kawp khun khrap (thank you), and met with mixed success. I had to say most of them repeatedly because my pronunciation was apparently abysmal. This language is hard.

We spent most of Saturday hitting the tourist sites around Bangkok. This city is interesting. I was a little surprised at how clean and organized it is. From what LTC Chapman had told us I was almost expecting something along the lines of Delhi, a hot busy mess of humanity, stray animals and trash. It turns out there is some of that, but Bangkok is as a whole a lot cleaner and more civilized. I suspect it’s largely because we’ve stuck to the touristy areas so far though.

The view from our hotel says volumes. You can see big shiny new high-rise buildings dropped sporadically in the middle of slums.

The Wats (temples) are fascinating. We hit three of them: Wat Phra Kaeo (The Grand Palace), Wat Pho (The Reclining Buddha), and Wat Arun. The palace and temple complex at Wat Phra Kaeo is huge. It contains the Emerald Buddha, a 75 cm tall Buddha statue carved from a single piece of jade that’s apparently been shuffled around the various dynasties in Southeast Asia for over 600 years now. The symbols and art in these Wats are a jumble of gods, demons and stories from Buddhism, Hinduism, and ancient China. The Thai people apparently still revere many of the Hindu gods. My limited reading on Theravada Buddhism had led me to believe that it was more or less ‘pure’ Buddhism, devoid of a lot of the extra dogma that Tibetan Buddhism, for example, is full of. I seem to be wrong about that. Thailand is VERY Buddhist though. 95% of the population is Theravada. Buddha statues hold the most prominent spots in every hotel and business.

It’s apparently illegal to export Buddha statues without a special license, which is very disappointing. I would have liked to bring a few more back with me. 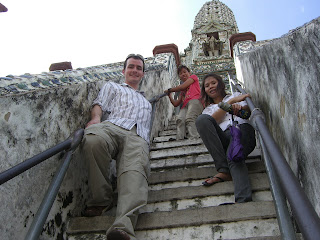 Tonight’s dinner will go down as one of the most bizarre I’ve ever experienced. We were supposed to meet with an old West Point grad, class of ’58 who is now a special advisor to the King. Instead we also met a classmate of his, both of their wives, a third graduate whose year I didn’t catch, and two ’95 grads, now majors in the Thai army. Slowly, over the course of the dinner, we found out that the general’s classmate was the retired minister of defense. His wife, who I was talking to most of the evening had been a senator, president of their committee on education. She incidentally insisted that I, my family, and my fellow cadets were all welcome to visit her on her island home anytime we pleased. We then learned that the third old-grad was the retired “supreme commander” of the Thai military forces (the chief of staff), and had led all of UN security forces in East Timor.

So a casual dinner with an old grad turned into a party with half of the Thai government. We all made sure our wai's (hands held up like in prayer accompanied with a bow) were extra deep when they left.

Tomorrow we fly up to Chiang Mai, where we will be teaching for the next week.