Off to Chiang Mai

We flew up from Bangkok to Chiang Mai, the second largest city in Thailand, today. Thais like to think of Chiang Mai as the quaint cultural center of Thailand, though apparently it's a more modern metropolitan city than they give it credit for. It is still famous for its great traditional Thai crafts, hopefully I'll be able to head into the city tomorrow afternoon. 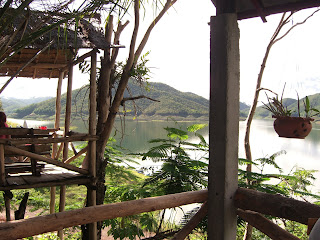 The training center is actually situated in a smaller town by the name of Dai Saket (Dai is Thai for mountain) about a half hour away. The area is a big valley, flanked by 6000' mountains covered in dense rainforest, way up in the north of Thailand. We'll be going even farther north next week, up into the jungle by Chiang Rai, on the border with Laos.

The center is actually a christian mission.

I'm glad to get away from the touristyness that is Bangkok. I think it definitely damages some of the cultural attraction. Even from the little I've seen so far the people up here are more like they are "supposed to be" in Thailand: irrepressibly friendly, smiling and welcoming.

A few cultural notes I've been wanting to make: 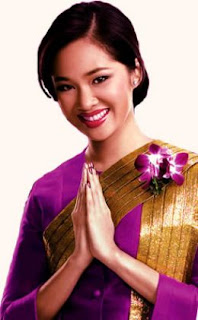 I see more Thai flags and flags of the King than there are US flags back home. Thais are apparently very patriotic.

Thais have a very strict hierarchy in their relationships. The elderly get a great deal of respect, monks get the most.

Depending upon the hierarchical difference between you and the person you're greeting, your wai changes heights. When greeting a monk Thais will hold their hands up by their forhead and bow low, whereas when greeting younger people they will hold it down by their chest. At first I thought this kindof ran against the whole Buddhist equanimity thing. It seems to work out ok though because they always show so much respect both upward and downward.

I see a whole lot of Johnny Walker ads over here, it makes me wonder about the fifth precept a little.

I start teaching my civil engineering (building bridges with k'nex ;-)) course tomorrow afternoon. We already introduced ourselves at a meeting in the chapel this evening. I'm a little nervous about getting useful information through t 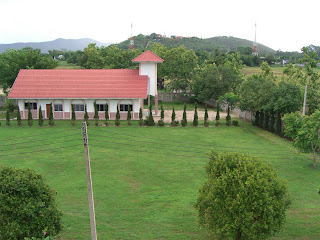 o my students about a subject I'm barely familiar with myself through a translator in a language I don't know. It's not even Thai. The people we're teaching here are from the northern Lahu hill tribe and speak their own language. The students here are 17 - 30 something, but most of them seem to be about our age, 18-20. Nevertheless we are apparently worthy of great respect. Since we're Americans, teachers, and in the military we get a really high wai when they decide to do it (the wai is a Thai and not a Lahu custom, so they only do it sometimes).

The Lahu tribe is some 74,000 strong in Thailand according to Lonely Planet. They're mostly animist by religion, but a lot of the tribes up here have been converted by christian missionaries (one of which helped standardize a system of writing for the Lahu less than 50 years ago). That is what it is I suppose. Most of them are refugees from Burma where they are often persecuted, and over here it's very difficult for them to gain their citizenship. They live mostly through small-scale agriculture, though the opium trade is still a problem in some parts of rural Thailand. I don't know if the Lahu take part or not. I'll write a lot more about them later on when we actually go up and visit their villages.

That's all for tonight. On a final note, dinner tonight was traditional Thai at a little shack restaurant overlooking a lake nearby. It took a little courage on my part, but it ended up tasting pretty good. Here's a picture: 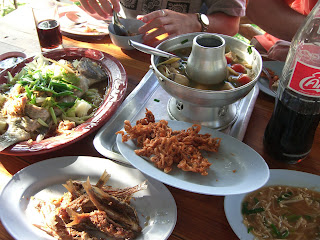