I taught my first "civil engineering" class today. I still have a hard time believing there isn't anyone on this team who knows more about that topic than I do (absolutely nothing), but I'll do my best staying a lesson ahead of my students. The real challenges are 1. teaching through a translator and 2. teaching engineering without math.

The K'Nex are a huge hit with the students. 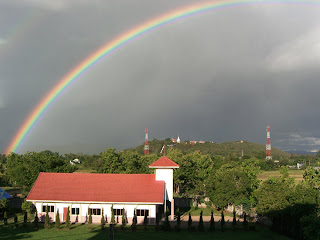 Living out in a jungle village, you don't grow up playing with legos and such like we all do. So, they had a great time designing things and trying to beat my bridge challenge.

The interpreter was 10 or so minutes late to class, which is not a problem over here. People work on "Thai time," which is essentially the same as "Middle Eastern time," "Indian time," or "Aloha time." A meeting at two o'clock means you will probably be meeting sometime between 2:00 and 2:30. For Thais, relationships are far more important than schedules. If you're having a conversation with a neighbor, you don't suddenly interrupt and say "I have to go to a meeting." That would be disrespectful. Instead you finish your conversation, say your farewells, and go to your meeting 15 minutes late. No one at the meeting will harass you about it.

Anyway, the interpreter was late and I can't speak ANY Lahu. So I had the students sit down and start familiarizing themselves with our chosen "building material", the K'Nex, which they loved. I also blasted Jimi Hendrix from my laptop... that went over well too ;-). A lot of interesting designs came out of my bridge challenge later in the class. The truss design I made was supposed to be the only one that could successfully hold the huge water jug I placed on it. In the first class, their prototypes failed satisfactorily, and mine held up like it was supposed to, to the awe of all the students. In the second class though, one of the students patched together a bridge that held the jug, and mine nearly broke... a little lesson in humility there.

The students were all dressed in their traditional Black Lahu formal atire, which was all hand made and very impressive. There are several different Lahu groups and they are identified by the color of their clothes. There is also the Red Lahu, White Lahu, and Yellow Lahu. The training center has a mixture of different Lahu groups.

At the end of the class the students stood up and gave a wai with a chorus of "thank you teacher," which was flattering if not a little over the top. It just goes to show how much people who live in third world conditions value knowlege and education. I saw it in India, and I see it here. Everyone who doesn't have access to it wants a good education above anything else. Maybe next time your kid doesn't want to go to school, bring him/her to a third world nation and have him interact with kids who can't.

I have a couple of great anectotes from other team members to share:

LTC Chapman told us a story yesterday of those same novice monks posing in a picture with me in my first post. Monks in Thailand are strictly forbidden from coming in physical contact with a woman. Even when the woman in question is making an offering, she must place it on an intermediary object before the monk can recieve it. so, LTC Chapman saw this giggly group of american girls who thought the little monks were just so cute and HAD to get a picture with them. They run over and ask the little monks who have to smile and politely oblige. The girls, of course, are crowding in and getting right up against the little novices who are still smiling tensely and allowing this all to happen like good monks. LTC Chapman said he could just see their skin crawling with the anticipation of the long and tedious cleansing ritual they were going to have to do later that day. 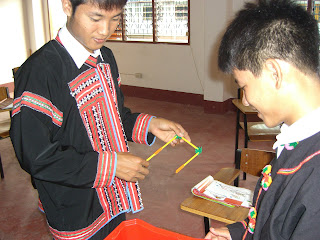 Taylor Minton is teaching a survival class this week. He had time at the end of his lesson yesterday to just talk for a while with his students. The first thing they asked him was if he had ever killed anybody before... I guess that's to be expected when we tell them we're soldiers. Then they asked him his age. When he told them he was 21, they all ghasped at him. Many of them are older than him, and they thought 21 was awefully young to be out and about in the world. Another great question was "do you have a girlfriend?" He was relatively sure the interpreter wouldn't know the word for "engaged" so he told them he was married. They where amazed at that because they thought he was very old to get married... apparently they had been married since age 16, 17, and 15.

Another great one about Taylor: On friday he got stopped in the Tokyo Narita airport because they found his leatherman in his carry-on bag... moron ;-). Anyway, they had to bring in a bunch of policemen, to ask some questions and such. All on the flight though, Taylor had been listening to a "learn Japanese" audio program available on our monitors. So, when the cops came to talk to him, he greeted them in Japanese with "Hello, my name is Taylor Minton, I'm very sorry," which they thought was just great. The policemen were all smiles and friendliness while they took away his leatherman and helped him along.

Goes to show, the smallest bit of effort goes a huge way when dealing with foreign cultures. Just saying sa wat dii khrap, smiling, and maybe giving a wai makes everyone in this country like you.
Posted by Kris Webber at 8:14 AM