Today we left for Chiang Rai, where we'll stay for the weekend before flying to Phuket on Monday. 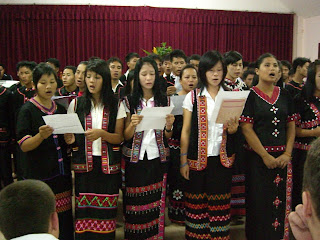 Last night the students put on a little goodbye ceremony for us in the chapel. The Dean and the teachers said a few words. The students sang many songs. They presented us with a parting gift, a traditional Lahu shoulder bag, the kind they all wear on excursions into the jungle, or to class at the Training Center. They also asked us to say a few words each. I didn't really know what to say. I told everyone that I had come to the center as a teacher, and had a lot of fun trying to teach them the little bit I know (when it comes to civil engineering, that's one thing I can say with absolute confidence). But, I said, I felt like I learned a lot more than I taught.

What I said is completely true. I learned a lot about teaching and about working with interpreters (not to mention the little bit of civil engineering I had to learn before teaching it). I also learned a lot about a culture I didn't know anything about less than a month ago. Then there was some of the practical lessons we were supposed to give. We had some lessons planned that we were pretty sure the Lahu students knew more about than we did. Taylor for example had a lesson on trapping on Friday. Just as we suspected, he ended up being the student and the Lahu the teachers. They had some pretty ingenious traps set up. They also ended up teaching him exactly what every plant in and around the Training Center was and what it could be used for. This one's for upset stomachs. This one's for open cuts. This one is poisonous. Apparently they even have a plant to treat diabetes. 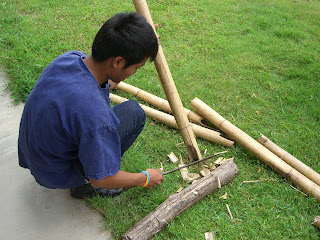 My last class ended up being a practical application class by means of bamboo construction, partially because I wanted to do something applied and partially because I was totally out of teaching material. I spent the morning scrounging up bamboo and some sort of rope for lashing. I ended up with meter-long sections of old, dry bamboo, which would have to do, and a ton of this plastic twine-like stuff, which was absolutely perfect. Like I said, I didn't really have much of a plan, so I ended up just bringing the class outside, showing them the materials and suggesting: "Ok, let's build something." 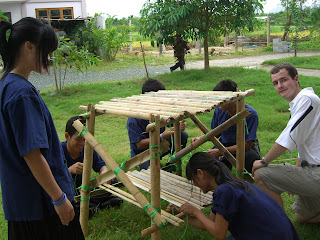 They decided on a table, and started to work right away. I gained a real appreciation for the awesomeness of bamboo that lesson. I swear you can build absolutely anything with a bunch of bamboo, a machete, and some string. A couple of simple machete swings forms the end of one piece into a perfect 90 degree joint, or splits it in half for use as decking. The stuff is sturdy too. The lesson turned out better than I could have expected. I got to learn a bunch about bamboo construction. I managed to throw in a few review pointers on the use of triangles instead of squares. And I taught them proper square, diagonal and continuous lashings, which were a significant improvement over their ad hoc versions.

So if I get marooned in the jungle anytime soon, I'll know how to build a hut, catch some food, and I have a sweet bag to keep all my jungle tools in.

I actually got to help out with the survival class on Thursday. We did a whole bunch of knots and shelter building. All these knots and lashings are making me feel like a boy scout again (apparently the Thai version of boy scouts translates directly as "tiger children"... awesome). I was impressed with myself that I remembered how to do them.

Towards the end of the goodbye ceremony, Ajan Marteen got up and said a few heartfelt words of thanks to us that changed my perspective on the whole thing a little. The way I understood it, he sort of expressed his thanks to us by explaining how grateful he was that God gave him the opportunity to get out of his village and study and make a better life for himself and the Lahu people. He said more, but that was the message I took away. Now, as much as I have mixed feelings about missionary activities (pushing a religion on people makes me uncomfortable), what they did here really seems to be a great thing. These people are immensely grateful for the opportunity to study. That was abundantly clear.


So, on the drive to Chiang Rai today we made two stops. One was a restaurant that makes the best pies in Thailand. The other was a Lahu childrens' home. This home was a bunch of bamboo huts more or less in the middle of nowhere. It was home to 20 school-age kids, 10 girls and 10 boys. Roughly half of them are AIDS orphans and the other half are from villages too remote for them to get to school otherwise. LTC Chapman had contacted them before the trip to ask what they needed. So we got the money together between the eight of us to buy them mats, blankets and mosquito nets. They were very grateful. We talked a little, and the kids sang us some Lahu songs. We played along and sang the Alma Mater to them... which I didn't want to do to these innocent children. Jeremy also threw in a frisbee to sweeten the deal a little. We threw it around for a while till some of them got the hang of it. 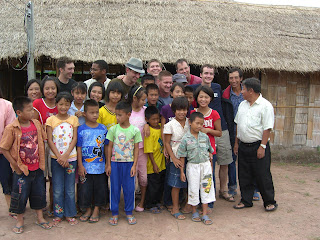