So I’ve been procrastinating making another blog post. I do that. Anyway, here’s the collection of the interesting occurrences and observations over the last few days.

On Wednesday an old Thai man came to the Training Center with an ice cream cart to sell cups and cones of awesome Thai ice cream to the students for 5 Baht a serving (the exchange rate is about 34 Baht to the Dollar right now). So, the COL decided to go ahead and buy ice cream for the whole student body, it ended up costing Uncle Sam about 400 Baht and got great cheers from all the Lahu students. So we bought the United States Army a few awesome points with the Lahu people. Of course, the ice cream man also made about a half-week’s worth of profit in 15 minutes, so he came back yesterday and will be (I have no doubt) today.

All told, you, the American taxpayer, will have donated $35 and 210 cones worth of happiness by noon today, Bangkok time of course.

They don’t actually eat the ice cream in a cone though. It’s enjoyed in a hamburger bun with sticky rice, peanuts and sweetened condensed milk… it takes a little getting used to. 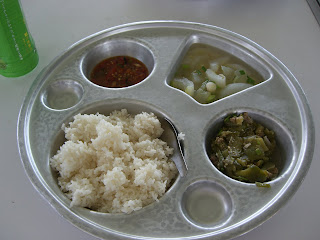 Other than the ice cream, which is delicious, were someone to ask me what I ate in Thailand, I would have to answer: “more white rice than you could ever imagine.” Breakfast, lunch, and dinner at the training center all consist of a generous lump of sticky white rice, two servings of unnamed boiled green vegetables in broth, and Lahu salsa (extra spicy). Oh, and the vegetables also reportedly contain bits of pork, but I’ve never brought a microscope to meals so I wouldn’t know. So, like I said, I eat a lot of white rice.

My experience with Thai food has been much better. We went to a nice place in Doi Saket Wednesday night called Sorn’s. Sorn had some of the best curries and pad thai I’ve ever had, absolutely delicious. You had to be careful about what order you ate the dishes in though, because if you had the huntsman’s curry too early in the meal you wouldn’t be able to enjoy any of the later dishes. You’d be too busy trying to extinguish the fire consuming your insides.

I’ve had a few thoughts about the experience of working with interpreters since I’ve started teaching at the Training Center. That experience is actually one of the major purposes of this trip, since it is something we will have to do very effectively come Afghanistan time, and it’s not easy.

The first thing I noticed with my first interpreter was that I would say a sentence, and he would say what sounded like three. I would take care to speak carefully and slowly so that the interpreter could properly understand me, but every once in a while a more complicated word would slip out of my mouth (“procedure” for example) and the interpreter wouldn’t skip a beat… which made me wonder whether he was even telling them what I was saying. This worry was only exacerbated by the responses I would get from the class, which almost never matched what I expected. When I asked a question I would get blank stares, and then have to reiterate that I was asking a question. Then, I would get back a response that about 60% of the time was completely unrelated to what I asked. That is, if the interpreter was able to relay to me what the students were saying in comprehensible English (which often wasn’t the case).

So you can see; there’s a plethora of difficulties in the process. It’s all made much worse with increasing complexity of topic (civil engineering was a bad one). You can’t realistically expect to communicate with more than 50% accuracy, and forget precision that gets totally lost in translation. Good practices to improve communication include using short sentences with simple words, speaking slowly and clearly, watching faces for appropriate responses, reiterating every concept several times in different ways, giving examples, and asking many questions to make sure the things are being transmitted well. Also make sure to get to know your interpreter personally, be amiable and friendly with him and he will go further to help get your message across. 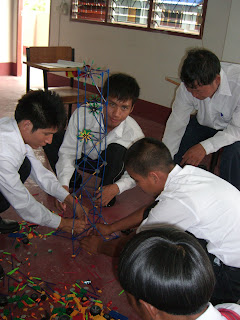 Another problem I ran into teaching was Lahu competitiveness, or should I say the complete lack thereof. A bunch of my planned classroom activities included a competition between groups of students, which works great with a bunch of Americans, but with the Lahu… not so much. I guess it comes from the way they live in jungle villages. On Wednesday, my classroom activity consisted of building the tallest free-standing tower out of K’Nex. One team had a great one going—it stood about shoulder height on me—while the other team’s was significantly smaller. One would expect that team to start getting a little excited and working harder. Instead, they were completely unconcerned with the other team. In fact, some of the people working on the tall tower decided to move to the short team and help them instead. So, it ended up being a great lesson in social dynamics for me, but the towers didn’t end up nearly as high as I had expected.